The Court Sketch Artist Says Taylor Swift Was Hard to Draw Because She's "Very Pretty," and the DJ Says He Could Pass a Polygraph

The Internet was pretty harsh on the courtroom sketch artist who drew TAYLOR SWIFT during last week's butt-groping trial.  Even though his work wasn't anywhere near as bad as the infamous Tom Brady sketch. 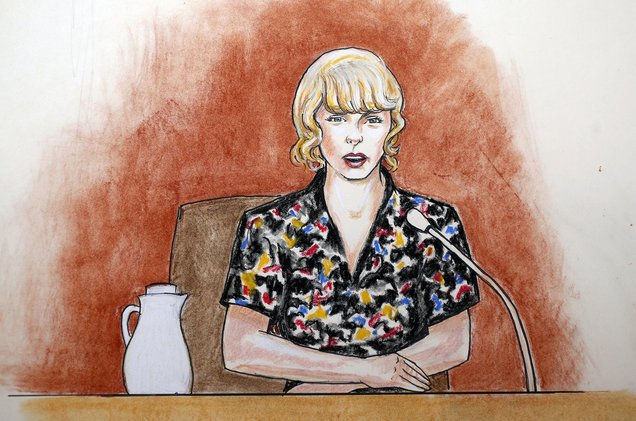 The guy's name is Jeff Kandyba, and he was interviewed by a local news station in Denver . . . because it's 2017, and literally EVERYBODY gets a crack at their 15 minutes of fame.

Jeff said it definitely isn't as easy as it looks.  Quote, "A person like Taylor Swift, who's very pretty . . . [and] has perfectly proportioned dimensions on the face . . . is actually much harder [to sketch] . . .

"Everybody's got little idiosyncrasies about them that you want to pick up on.  It's hard.  Some people are just much easier to draw than others.  If you give me somebody with a beard and glasses . . . bingo . . . [I] got it."

(Here's video, and you can find some of his sketches, here and here.  It's actually pretty interesting.  His job is to make still drawings while people are moving around . . . and so he practiced drawing her BEFORE the trial.)

Meanwhile, the butt-groping former DJ, David Mueller, was interviewed on "Good Morning America" yesterday, and he insisted that he never did anything wrong.

He basically called Taylor a liar, and said, quote, "I can pass a polygraph."

He also said that he didn't want any money . . . despite asking for $3 million in damages . . . and that all he wanted was a note from Taylor and her camp saying that there was a misunderstanding, so he could show potential employers that he isn't a scumbag.

He said he plans to fight back, and may file an appeal.  But "Good Morning America" points out that an appeal would probably be a very expensive undertaking for him . . . especially since his chances of winning seem to be small.

(Here's video.  In that now-famous awkward photo, it looks like he has his hand on her backside.  So, maybe he meant to do it as an ill-advised 'joke,' but then accidentally brushed her skirt up as he reached around?  Otherwise, one of them is lying, and it's hard to see why Taylor would.)