BURT REYNOLDS passed away yesterday at the age of 82.  He suffered a heart attack, and didn't make it.  He's had heart problems for a while.  His rep says Burt was very frail recently, and had been in and out of the hospital.

TMZ has a 911 call, where a guy says Burt is having trouble breathing and chest pain.  Burt was awake, but he wasn't answering questions.  The call was made just after noon yesterday.

Burt had open heart surgery in 2010, and in 2009, he went to rehab to "regain control of his life."  He'd become addicted to painkillers after having back surgery.

His breakout movie role was "Deliverance", and that led to a series of box office hits including "The Longest Yard", "Semi-Tough", "Hooper", "The Cannonball Run", "The Best Little Whorehouse in Texas", and the "Smokey and the Bandit"movies.

He was in a lot of flops in the late-'80s, but he bounced back with the '90s sitcom "Evening Shade", which got him two Emmy nominations and one win.

And his movie career rebounded with "Boogie Nights" in 1997, which got him his first and only Oscar nomination.  He was up for Best Supporting Actor, but lost to Robin Williams for "Good Will Hunting".  He DID win the Golden Globe though.

Back in the '70s, Burt turned down a chance to become James Bond, saying, quote, "An American can't play James Bond.  It just can't be done."

He later admitted regretting it.  He once joked, quote, "Now, in the middle of the night, you hear me wake up in this cold sweat going, 'Bond, James Bond.'"

He also turned down playing Han Solo in "Star Wars", and he almost played Michael Corleone "The Godfather".  He also passed on the Oscar-winning Jack Nicholson role in the 1983 movie "Terms of Endearment".

Speaking of regrets, shortly after doing "Deliverance", he posed naked for a legendary "Cosmopolitan" centerfold. 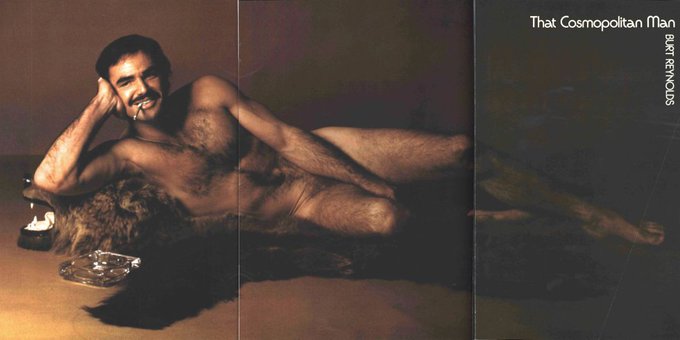 Two years ago, Burt said, quote, "It was really stupid.  I don't know what I was thinking.  I really wish I hadn't done that."

Burt's last role was in a movie called "Shadow Fighter".  This past spring, he signed on to do Quentin Tarantino's upcoming Charles Manson movie "Once Upon a Time in Hollywood", but he hadn't filmed any scenes yet.

He was going to play George Spahn, who owned the ranch where Manson and his followers lived.  Obviously, it's too soon to say who will replace him.

He had one child with Loni, an adopted son named Quinton.

She released this statement:  Quote, "Quinton and I are extremely touched by the tremendous outpouring of love and support from friends and family throughout the world.

"Burt was a wonderful director and actor.  He was a big part of my life for 12 years and Quinton's father for 30 years.  We will miss him and his great laugh."

(Here's a rundown of Burt's "most memorable" roles.)