A Guy Mocks a Woman's Dress on Tinder . . . Now the Company That Made It Is Using Her as a Model

There's a 20-year-old woman named Thea Chippendale and she's a student at the University of Lincoln in England.

A few weeks ago, she matched with a guy on Tinder . . . and he messaged her to CRITICIZE her dress. He wrote, quote, "That dress in the last photo is not doing any favors. Hope this helps."

She posted his messages and a picture of herself onTwitter. . . and it went viral last week.

Well it turns out the clothing company ASOS made the dress, and they heard about what happened and reached out to Thea.

And now, less than two weeks later . . . they're using her as a MODEL, and put her photo on the dress's product page on theirwebsite.

(And speaking of Tinder, two people in Pennsylvania matched on Tinder last week . . . then gotmatching tattoosbefore they even met.) 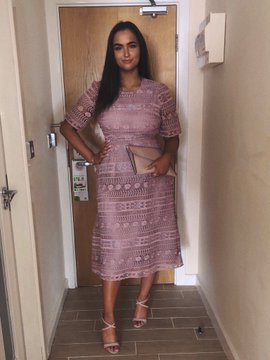 Men are trash. (Included the pic he’s on about

13.4K people are talking about this